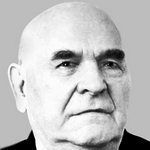 Soviet Ukrainian painter. Member of the USSR Academy of Arts. Boris Stepanovich Gerus was born on July 25, 1905 in the village of. Petrovyrovka (October) of the Odessa region. In 1930-1936 he studied at the Odessa Art College. M. Grekov from T. Fraerman and P. Volokidin. Member of the Great Patriotic War. Awarded with medals. Since 1947, Gerus B.S. – Member of the Union of Artists of the USSR. After the war, for 15 years, he headed the Odessa Picture Gallery (now Odessa Museum of Western and Eastern Art). The representative of the older generation of the Odessa School of Painting. Together with such outstanding artists as NA Sheluto, VM Sinitsky, GE Shpolyansky, NA Pavlyuk, Boris Stepanovich Gerus was the keeper and conductor of the traditions of the Association of South Russian Artists. Member of art exhibitions: republican since 1936, all-Union since 1965 and foreign since 1966. In 1950, a solo exhibition of the artist in Odessa was held. B.S. Gerus is a master of landscape, still life and a thematic picture. The main works: “Gray Day” (1937); “The enemy over the city” (1947); “After a hot day” (1954); “Vineyards” (1963); “Steppe spaces” (1967) and others. Participated in exhibitions: republican since 1937, all-Union since 1965, foreign since 1966. The works are kept in the National Art Museum of Ukraine, the Odessa Museum of Local History, in the regional museums of Ukraine, as well as in private collections in Ukraine and abroad.