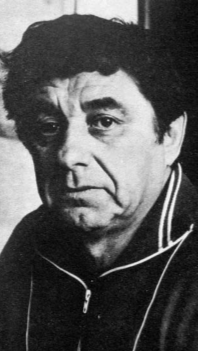 Soviet Ukrainian painter. Biography of Alexander Borisovich Freidin complex. He was born in 1926. When he was 11 years old, in 1937, as the “enemy of the people”, his father was shot. During the war he worked in the factory. And only in 1948, at 22, he entered the Art College (1948 – 1951). Describing Freydin the pupil, D.M. Frumina wrote: “distinguished by his outstanding visual abilities and obstinate, capricious character.” Unfortunately, in this case, the remarkable teacher D.M. Frumin and in the future a great artist A.B. Freydin did not understand each other. He was no longer a schoolboy, he needed freedom, which he found in the studio of Atsmanchuk. Pictures of the 60s and the beginning of the 70s, with which Freidin came to the viewer – often landscapes, powerful, indomitable in his picturesque energy and strength. Landscape “At Home” in 1972 from the collection of ISME gives an idea of ​​the first stage in the creative path of the painter, like the landscape “The City” of 1977, more constructive, but both are the way to self, to self-knowledge and knowledge of the world in its endless manifestations. The end of the 1950s-the 1960s was the time of the “severe style” in Soviet art, a new way of pictorial thinking, the solution of creative problems, opposite to the smoothly propagandistic socialist realism. And in Odessa “severe style” found then its adherents. Among them were, in the first place, “and A. Atzmanciuk and Y. Yegorov. Naturally, A. Freidin tried himself. From 1969 to 1974 – five years – Alexander Freidin worked on his painting. The original plan was a requiem for the victims of Stalin’s repressions, among which was his father. For the Requiem, a powerful, unusual pictorial form was needed. A. Cardin was destroyed by cardboard after A. Freydin, until he came to the composition, which can be seen today in the Museum of Modern Art of Odessa. But the window was already in 1974, the Khrushchev thaw ended ten years ago. A. Atsmanchuk proposed to name the painting, and he really liked him, – “The Funeral in Madrid”. The romance of the civil war in Spain, the opposition to fascism (what a difference, what color is fascism) – with such an Aesopian language the artist agreed or resigned himself. The painting, translated into canvas, in large format, was shown at the regional exhibition in Odessa and … was not allowed to the republican exhibition in Kiev, as the artistic council saw in it “formalism”. Unfortunately, the widow of A. Freidin after the death of her husband sold this picture in a private collection in the US. And it remains to be rejoiced that in Odessa there was the original cardboard, which gives us an opportunity to understand the tragic power of the artist who embodied his requiem: they are destroyed, humiliated in the same row, they are with us, they are among us. And how can I not remember the words from the song: “Comrades in prisons, in cold chambers, you are with us, you are with us, even though you are not in the columns …”. 1974 is a turning point in the work of Alexander Freidin. Perhaps, a collision with the Kiev artistic council, a printed accusation in the republican publications in “formalism” somehow inspired the artist to understand that the 37th year did not completely disappear into oblivion. Less and less he gives paintings to exhibitions, almost refuses from custom, hudfondovskih works. When asked why he was not exhibited, ironically smiling, he told me (I think we both did not know Yiddish, but we understood each other): “work for this melikha, dismiss”. I would say that from 1974 to 1984, the last year of his life, he woke up to the anguished longing for freedom. He was not restricted, he not only worked, he created his own world, complex, philosophical, the meaning of which was the eternal and most important choice: “freedom is not freedom.” As he once pleased the sensual perception of the viewer using a countermeasure that allowed to bring to the physically perceptible density the hot air, deep shadows, the warmth of the rough walls of the beloved city! And – cut off. And like he gave the order to himself: only disarming simplicity of artistic decisions is needed. Then the series “Windows”, “Man and the bird” arose, defenseless portraits in their confession. This is what Alexander Borisovich Freidin entered into great art. It is to the works of this period that A. Freidin’s paintings, now stored in the Museum of Modern Art of Odessa, such as “Portrait of a Young Man”, “Man with a Cigarette”, “Sitting Boy”, “Woman’s Portrait”, belong to the works of this period. In each of them the existential loneliness of a person in this uncomfortable world, in each of them – longing for freedom. This self-destructive melancholy is read by the viewer in his portrait of Alexander Blok, in a man sitting at the cage with birds, in the figure of a woman, who dropped her head on the table. The paintings of Alexander Freidin the last ten years of his life are strict and in color, tonal decision. Masters are concerned about the texture of the canvas, the line, and not the riot of colors. A. Freidin rightfully occupies a place of honor in the pantheon of contemporary art in Odessa along with artists such as Alexander Atzmanciuk, Yuri Egorov, Lev Mezhberg. The main works: “The Road” (1960); “Shevchenko in the fortress” (1964); “Shevchenko listens to the kobza player” (1965), “TG Shevchenko over the Dnieper” 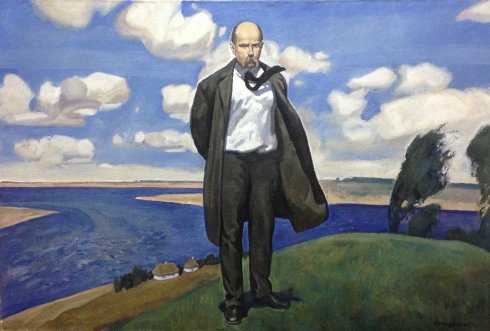