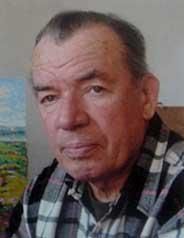 Soviet Ukrainian painter. Member of the USSR Academy of Arts. Leonid Grigoryevich Faschenko was born in 1937 in Zaporozhye. From 1952 to 1957 he studied at the Dnepropetrovsk Art College, then until 1960 he served in the ranks of the Soviet Army. All further fate and creative biography of the master is connected with Zaporozhye. Already from the first steps of his creative activity Leonid Fashchenko showed himself as an extraordinary and talented landscape painter. The young artist becomes an active participant in many regional and republican exhibitions, according to which in 1966 he was admitted to the Union of Artists of the USSR. Leonid Faschenko is an artist of the lyrical landscape. The main thing for him is to convey the mood, the state of nature. His painting flows with colors that have countless shades. Preserving the transparency in the image of light and air, the artist achieves a harmonious wholeness and grandeur of metaphoricality. Over the years, the artist’s painterly artistry grew, the individual manner was clearly manifested, the favorite theme was the nature of the native land. The artist died in 2010 in Zaporozhye. The artist’s artistic heritage is very significant. His works are preserved in the Zaporozhye Art Museum, in numerous private collections in Ukraine and abroad.