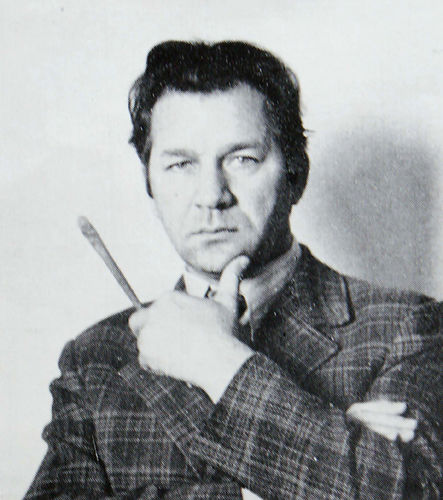 Soviet Ukrainian artist. Member of the USSR Academy of Arts. Laureate of the award. I.I. Brodsky. Evchenko Ivan Petrovich was born on January 18, 1936 in with. Vishnevka of the Kherson region. From 1958 to 1963 he studied at the artistic and pedagogical department of the Odessa State Art College. M.B. Grekov, where his teachers were T.Igorova, G.N. Pavlyuk. Since 1965 Evchenko EP participates in republican, all-Union and foreign art exhibitions. Master of thematic paintings and portraits. He was awarded with the Certificate of Honor of the Ministry of Culture of Ukraine. Member of the Union of Artists of Ukraine since 1967. Creative profession: monumental and easel painting. Works in various graphic genres: a thematic picture, a portrait, a landscape. Since 1963 he worked in the Zaporozhye Artistic Industrial Workshops of the Art Fund of Ukraine as an artist (1960s-1980s). Leading in the work of Ivan Petrovich Evchenko is the theme of rural leisurely life, labor, on earth and the inextricability of man’s connection with nature. Most of his works depict everyday aspects of Ukrainian rural life. In 1964, in co-authorship with IA. Malyarenko creates a mosaic panel “Hero of Our Days”. In 1977 in the Zaporozhye Regional Art Museum held a solo exhibition of E.P. Evchenko. In 1994 he became a laureate of the Prize. I.I. Brodsky. He was awarded with the Certificate of Honor of the Ministry of Culture of Ukraine. The artist’s works are represented in the Zaporozhye and Donetsk art museums, in gallery and private collections in Ukraine and abroad. The main works: “Firstborn”, 1965, “Beetrooters” 1967, “Twilight”, 1967, “Dubki”, 1969, DXM; “Farewell to the Father”, 1971,, ZHM; “Swim, wreaths at Ivan Kupala”, 1972, ZHM; “TG Shevchenko in Ukraine”, 1973, “Summer”, 1974, “Sadivennitsa”, 1974, ZHM; “Sowers”, 1975, “Dneprobuilders” 1977, The Hour Meeting, “Mechanics of the Upper Tersi”, 1984, “The slopes of the Dnieper”, 1984, ZHM; He died in 2014.