Soviet artist, ancestor of contemporary fine art of Kyrgyzstan. People’s Artist of the USSR. He was born in Pishpek of the Turkestan Territory of the Russian Empire (today Bishkek, Kyrgyzstan) on October 17 (30), 1902, in the family of the clerk of the local infirmary. In 1918 he became a student of the seminary. Here Chuikov began to take painting lessons from the drawing teacher NG Khludov. In 1920, Semyon Afanasyevich received the direction of the Vernensky Regional Committee of the Komsomol for study at the Tashkent Art School. Then Chuikov continued his studies in the Moscow Vhutemas (1921-1930), where, since 1924, he was engaged in the workshop of Professor RR Falk. In 1927, at the first All-Union Art Exhibition “The Art of the Peoples of the USSR,” three works by Semen Afanasievich were exhibited. The paintings were seen and received positive reviews by critics. In 1929 the State Tretyakov Gallery bought Chuikov’s canvas “Boy with a Fish”. Based on the material of his close Kirghizia, the main thematic trend that Chuikov develops throughout his work is the life of ordinary people in their surrounding nature. Also, most of the artist’s heritage consists of works of the Indian cycle, which resulted from three trips (1952, 1957, 1968) to the painter in this country. Semen Afanasyevich Chuikov took an active part in the development of the fine arts of Kyrgyzstan. On his initiative, the Union of Artists of Kirghizia (1934) was established, the first picture gallery (now the Kyrgyz Museum of Fine Arts, Bishkek) was opened. Chuikov was engaged in teaching activities in Vhutein, then at the Leningrad Institute of Proletarian Fine Arts (1929-1932), and the Moscow State Art Institute. IN AND. Surikov (1947-1948). The winner of two Stalin Prizes (1949, 1951), the Jawaharlal Nehru Prize (1968), he was awarded orders and medals. Active member of the Academy of Arts of the USSR since 1958. In 1963, Semen Afanasievich Chuikov was awarded the title “People’s Artist of the USSR” Three books of travel and memoirs were published from the pen of Chuikov: Images of India (1956), Notes of the artist (1962), Italian diary (1966). Works by Chuikov SA are in the collections of the State Tretyakov Gallery, the State Russian Museum, the Kyrgyz National Museum of Fine Arts named after G.A. Aitieva, the Krasnoyarsk State Art Museum. IN AND. Surikov. The artist died in Moscow on May 18, 1980. 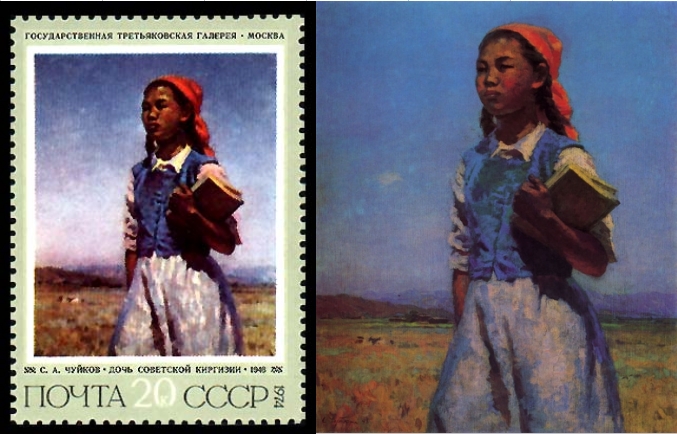