Soviet Ukrainian painter. Member of the USSR Union of Artists. Classic of the Ukrainian landscape. People’s Artist of Ukraine. Evgeny Vasilyevich Chuikov was born on May 18, 1924 in the Lower Reut of Kursk region. He studied at the studio of the artist Ivan Fedyanin. Member of the Great Patriotic War, awarded military awards. After returning from the front, E.V. Chuikov himself is engaged in painting, often goes to the open air. Since 1957 he has been a regular participant of regional, republican, all-union art exhibitions. In 1960 he became a member of the Union of Artists of the USSR. In the mid-60s Chuikov went to sketches in Vladimir (Russia). Two years spent in Vladimir and the joint work with artists Kim Britov and Vladimir Yukin have a significant influence on the work of Yevgeny Vasilyevich. Returning to Zaporozhye artist works a lot with George Kolosovsky. For ten years he holds the post of chairman of the Zaporozhye branch of the Union of Artists of the Ukrainian SSR. He was also a board member of the Union of Artists of the Ukrainian SSR. Honored Artist of Ukraine since 1977. People’s Artist of Ukraine since 1995. He was awarded with the Certificate of Honor of the Presidium of the Supreme Soviet of the Ukrainian SSR. Participated in international art exhibitions in France (1968), in Finland (1972), in Poland (Wroclaw, 1974). in West Berlin (1978), in Canada (1978 and 1983), in Yugoslavia (1979). He exhibited his works in Roy Miles Gallery (Great Britain), Garden of Eden (Great Britain), Gallery Russia (California, USA), Greenhouse Gallery (San Antonio, USA). The artist’s paintings were sold at auction houses “Christie’s” (September 8, 1999 and September 28, 2000), “Bonhams London” (November 26, 2007). The works of Chuikov EV are presented in museum and private collections of Ukraine, Russia, Great Britain, the USA. In 2011, the Kiev National Museum of Russian Art hosted the exhibition “Evgeny Chuikov. Valery Chuikov. Painting”. 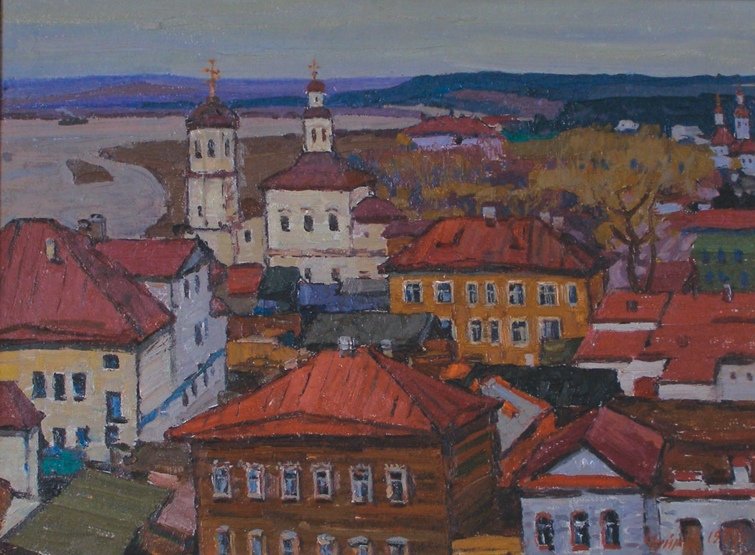 Photo: In this house from 1966 to 2000. lived People’s Artist of Ukraine – Chuikov Evgeny Vasilievich