Soviet Ukrainian painter, graphic artist and teacher. Member of the USSR Academy of Arts. Leonid Ivanovich Chernov was born June 18, 1915 in Starobelsk, Kharkov province (now – the Lugansk region). Already in his childhood, he was affected by an impetuous attraction to drawing. The future artist copies pictures from books, magazines, constantly draws up school newspapers. His school teacher of drawing was Fyodor Osipov, a pupil of the Moscow School of Painting, Sculpture and Architecture, a disciple of V. Serov and K. Savitsky. He noticed the inclinations of artistic talent from his pupil and gave Leonid special attention. From 1934 to 1937, L. Chernov studied at the Kharkov Art College. Since 1938 he studied at the Kharkov Art Institute. Teachers – N. Samokish, A. Kokel. During the Second World War Kharkov Art Institute was evacuated to Samarkand. There in 1942 LI. Chernov defended his thesis “Supply of weapons to partisans.” In 1943 he became a member of the Kharkov organization of the Union of Artists of the Ukrainian SSR. From 1944 to 1947, Leonid Ivanovich Chernov served as director of the Kharkiv Art College. Member of republican, all-union and foreign art exhibitions since 1945. Since 1947 he taught at the Kharkov Art Institute, since 1961 – Associate Professor, since 1977 – Professor. For many years, he headed the painting section of the Kharkov organization of the Union of Artists of Ukraine. Worked in the field of easel painting and graphics. Unsurpassed master of portraits, landscapes, still lifes.
LI Chernov created several thematic cycles, in particular, “Kharkov”, which included landscapes “Morning of the native city”, “Kharkov evening”, “New Kharkov”. In general, the pictures of this cycle give an almost complete portrait of the renovated big city. The individual cycles combine paintings that appeared as a result of traveling through India, traveling to Cuba and Bulgaria.
The main works: picturesque – “Mother” (1948, DXM), “Dreams” (1964, ХХМ), graphic – a series of color lithography “Priazovye” (1955), a series of color etchings and watercolors “In India” (1957), a series of drawings to Ukrainian folk songs (1961-1965), etc. Numerous solo exhibitions were held in Kharkiv, Kiev, Dnepropetrovsk, Lviv, Chernivtsi, Odessa, Sumy, Starobelsk. In 1966, he was awarded the title “Honored Artist of the Ukrainian SSR”. Honorary citizen of the city of Starobelsk since 1986. The works of Chernov LI are kept in museum collections in Kiev, Poltava, Lviv, Uzhgorod, St. Petersburg, Moscow, in gallery and private collections in Ukraine and abroad. 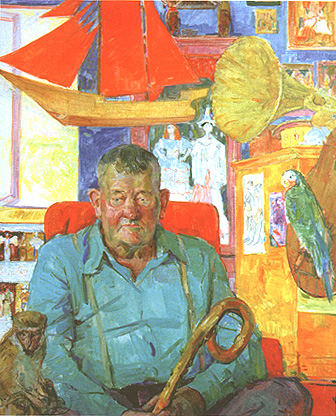 Photo: Chernov Leonid Ivanovich “Portrait of the artist AM Shcheglov.” 1978