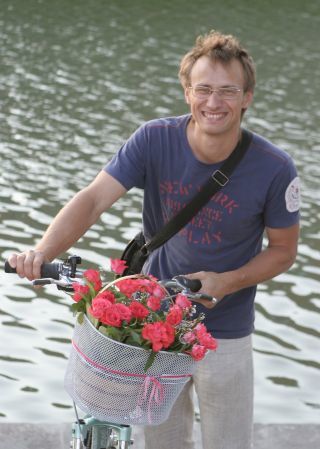 Ukrainian painter and graphic artist. He was born on May 22, 1978 in the town of Sambor, Lviv region. In 1998 he graduated from Kharkov Art College. In 2004 he graduated from the faculty “Fine Arts” specializing in “Graphics” Kharkov State Academy of Design and Arts. Member of Ukrainian and international exhibitions (more than 90). Works are in private collections in Ukraine, Russia, Greece, England, Hungary, Spain, Italy, France, USA, Canada, China, Japan, successfully sold at auction “Christie’s”. Works in various graphic and pictorial techniques, preference is given to a pencil drawing. Genre range: landscape, portrait, nude, illustration, figured compositions, literary and historical reminiscences. From 2004 to 2006 – a teacher of special disciplines at the Kharkov Art College. 2005 – 2014 teacher of drawing at the Kharkov State Academy of Design and Arts. Since 2008 – is in the Union of Artists of Ukraine.
He was awarded the medal “Talent and calling” by the International Association “Peacemaker”.
Winner in nomination drawing in ARC (Art Renewal Center) drawing “Boat”, 2001.
2014 – leaves Ukraine and moves to Russia.
From 2015 to 2016 he teaches plastic anatomy at the Ryazan Art College named after. G. K. Wagner.
Since 2016 he teaches drawing and painting at the Moscow Institute of Culture (Ryazan branch).
2016 – The first place among the graphic works at the competition dedicated to the exhibition “Open lesson”
2016 – joins the Union of Artists of Russia. Lives and works in Russia.