Soviet Ukrainian painter and graphic artist. Member of the USSR Academy of Arts. Mikhail Maksimovich Chepik was born on November 21, 1920 in Kiev.
After graduating in 1940, the Kiev Art School entered the painting department of the Kiev State Art Institute. But study was interrupted by the war and in 1941, Mikhail Chepik was drafted into the Red Army.
After the end of the Kharkov Armored School, he fought on the fronts of the Great Patriotic War. Marked with military awards. After demobilization, in 1946, he returned to studies at the Kiev Art Institute, which he graduated in 1951. Its teachers were: А.А. Shovkunenko, TN Yablonskaya, K.N. Yeleva. The father of the famous artist Sergei Chepik (born in 1953), now living in France. He took part in republican art exhibitions since 1949, all-Union – since 1957, foreign – since 1953. Chepik M.M. – Member of the Union of Artists of the USSR. Worked in the field of easel painting. Master of a thematic picture. The main works: “Highlanders”, “Dominoschiki”, “Miners”, “Hockey players”. To the Jubilee Shevchenko’s decade he paints the paintings “Reva ta Stogne Dnieper Wide” (1961) and “The Great Sum” (1964). At the same time, the artist constantly works on still-life, portraits and landscapes. He makes creative trips to Ukraine, to Russia, to Central Asia and beyond the limits of the Soviet Union. In the 1970s he created a series of pastels with views of Moscow, Yugoslavia, France and Czechoslovakia. Personal exhibitions were held in 1970 in Kiev and Belgrade, in 1971 – in Moscow, in 1973 posthumous – in Kiev. The artist died on December 9, 1972. He was buried in Kiev at the Baykovoye cemetery.
Works of M.M. Chepika is represented in collections of art museums in Ukraine, in gallery and private collections in Ukraine, Russia, Great Britain, the USA. 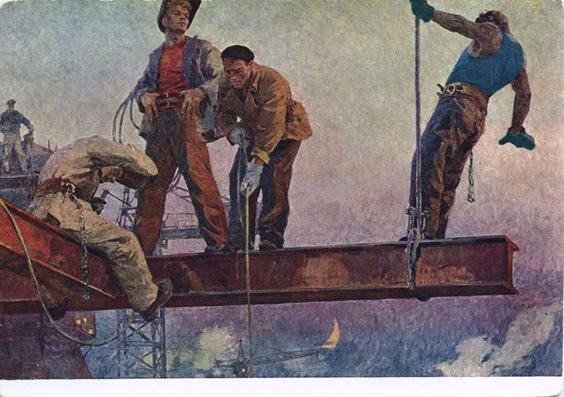