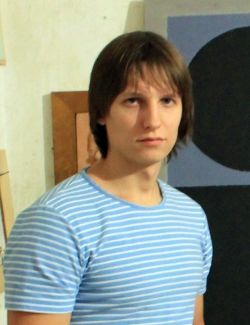 Ukrainian painter. He was born in 1985 in Odessa. He studied with his father (artist), Igor Antonovich Bozhko. A participant in all-Ukrainian, international and many regional exhibitions. In 2008, he was engaged in painting the Savior’s Transfiguration Cathedral (Odessa). In 2010, 2011 and 2012 years. participated in international symposiums of artists in Koblevo. In 2010 he became a laureate of the Young Artists Contest held by the Museum of Modern Art (Odessa). Since 2011 – a member of the Youth Union of Artists of Ukraine. Since 2013 – a member of the National Union of Artists of Ukraine. Works in various scenic genres (mostly – abstract art), engaged in sculpture.

Photo: Sergey Bozhko at the Exhibition: Presentation of the project “The sensation of the city”.