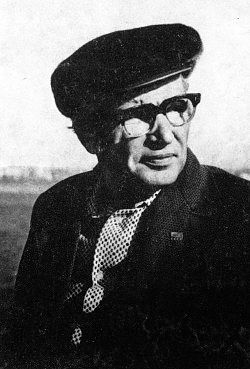 Ukrainian artist. Master of easel painting, teacher.
Nikolai Stepanovich Borovsky was born on April 14, 1930 in Novo-Georgievsk (now Svetlovodsk) in the Kirovograd region.
Graduated with honors from the Dnepropetrovsk State Art School (1948-1953), a professor in the specialty – NS. Pogrebnyak,
In 1954 – 1960 he studied at the Kiev Art Institute. Teachers in the specialty: MI Ivanov, MI Khmelko. The diploma work “Kolyivshchina”, the head – GS Melikhov.
In 1960 Borovsky NS Returns to Dnepropetrovsk and begins teaching in the art school. His pupils were well-known Ukrainian artists Kot Peter Alekseevich and Pavlyuk Victor Illarionovich.
From the same year, the painter’s paintings were exhibited at city, republican, all-Union and foreign art exhibitions
Member of the Union of Artists of Ukraine since 1964.
In 1969 he was awarded the III prize of the Central Committee of the Young Communist League and the Union of Artists of the Ukrainian SSR for the painting “Worker. Year 1928 », presented at the republican exhibition dedicated to the 50th anniversary of the Komsomol.
The creative range of NS Borovsky was not limited to work on thematic paintings and portraits. He painted landscapes and still lifes, differing in the same emotional and picturesque restraint that is inherent in all of his work.
In 1980, a personal exhibition of the artist was held in Dnepropetrovsk.
In 1984 he received the title of Honored Artist of the USSR.
The artist died on April 26, 1988 in Dnepropetrovsk.
Works of N.S. Borovskogo stored in the Dnepropetrovsk Art Museum, Dnepropetrovsk Historical Museum. DI. Yavornitsky, in the gallery and museum collections of Ukraine and beyond.