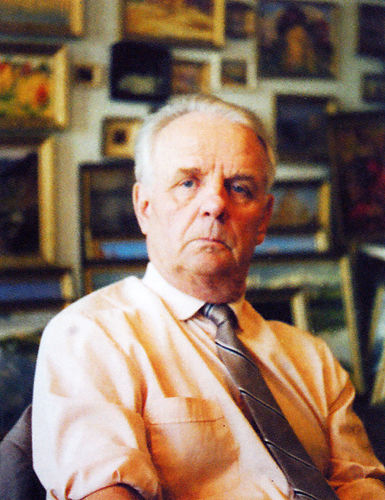 Ukrainian painter and graphic artist.
Ivan Gavrilovich Avramenko was born June 5, 1923 in the village of Kolyadinets Hadyachsky district in Poltava.
Since 1934 he lived and worked in Krivoy Rog.
Member of the Great Patriotic War. At the front since February 1944 .. Marked with military awards.
From 1947 to 1949 he studied at the Odessa Art College. M.B.Grekov at the professor L.Muchnik.
In 1949, I. Avramenko was convicted of dissent and sentenced to nine years of camps with the serving of the Gulag. In the conclusion he spent six years. Later he was rehabilitated.
In 1955 he entered, and in 1957 he graduated with honors from the Chisinau Art College, where he studied under V.Sadovskaya and V.Zazerskaya. After graduation, he worked at the film studio “Moldova-Film”.
In 1958 he returned to Krivoy Rog and joined the Krivoy Rog Association of Artists.
Since 1958 – an active participant in city, regional, all-Ukrainian and international art exhibitions.
Avramenko IG worked in the field of easel painting and graphics. The main genre is lyrical and industrial landscape.
He carried out a number of creative trips to Chernigov, Poltava, Sumy region, to Karelia, Crimea and the Caucasus.
Since 1974 – a member of the Union of Artists of the USSR, later the National Union of Artists of Ukraine.
The artist died on November 6, 2008 and is buried in the Central Cemetery in the city of Krivoy Rog.
Graphic and pictorial works of Ivan Gavrilovich Avramenko are kept in museums of Ukraine and Russia, in gallery and private collections.