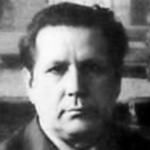 Soviet Ukrainian painter. Member of the USSR SS. Mikhail Vasilievich Akinshin was born on February 18, 1927 in the village of. Lomov Kursk region (Russia). In 1951 he graduated from the Tashkent Art School. P.P. Benkov Teachers: S. Redkin, M. Zhukov. In 1953 moved to Zaporozhye. Graduated from the Kiev Art Institute in 1962. Since 1965, Akinshin MV – participant of regional, republican and all-Union art exhibitions. Since 1968 – member of the Union of Artists of the USSR. In the work of the painter, the influence of Martiros Saryan’s coloring is examined. It is also impossible to compare it with the tranquility and philosophical wisdom of the canvas, with the paintings of the great painter – Nicholas Roerich. The artist died on July 22, 1982. In 2012, in the Zaporizhzhya Regional Art Museum an exhibition of paintings by Mikhail Akinshin “From Voznesenki to Samarkand” dedicated to the 85th anniversary of the birth of the painter was held. The works of the artist are presented in museum and private collections in Ukraine, Russia, Uzbekistan, France, Switzerland, the United Kingdom, the USA and Canada.