Soviet painter, a member of the Union of Artists of the USSR. She was born in 1926 on the Levashovo farm of the Anastasievsky district of the Rostov region. From Russian Germans. Father – Dreyling Felix Mikhailovich, scientist and agronomist. He was shot in 1937. Rehabilitated in 1964. Mother – Dreiling Alexandra Vasilievna, sculptor. Graduated from the Central School of Technical Drawing of Baron Stieglitz. In 1940, Aleksandra Feliksovna Tokareva entered the Rostov Art College, which graduated with honors in 1948. Special art education continued in 1953 in the Leningrad Institute of Painting, Sculpture and Architecture. I.Е. Repin Academy of Arts of the USSR, which graduated in 1959 on the workshop of V.М. Oreshnikova. Thesis “Morning”, the assessment – excellent. The training took place at the picturesque faculty, the qualification of the artist of painting was appropriated. From 1959 to 1963 she studied at the Creative Workshop of the Academy of Arts of the USSR, head of the VM. Oreshnikov. Member of the USSR Union of Artists. After the termination of Creative workshop periodically lived and worked in the House of creativity “Academic dacha”. Since 1970, together with her husband, a Leningrad painter, Vladimir Fedorovich Tokarev, he constantly lives in a house-workshop built by them in the village of Kisharino in the Vyshnevolotsky district of the Tver region, next to the house of artists’ work “Academic Dacha”. All the work of A.F. Tokareva has since been associated with the Tver land. A.F. Tokareva is a participant of many All-Union, Republican and international exhibitions, since 1959, and also such thematic exhibitions as “Leningrad” in 1963; Moscow, “Artists to the people” in 1964; Tokyo, Japan, “Contemporary Art” in 1972; Leningrad, “Autumn Salon” in 1979; Havana, Cuba “Peace and Sport”, 1983; Moscow, “Contemporary Art” in 1990, etc. Personal exhibitions of the artist were held in Leningrad in 1989 and in Bendorf, Germany in 2002. The works of Alexandra Tokareva are in the collections of the Museum of the Academy of Fine Arts in St. Petersburg, the Taganrog Art Museum, the Kemerovo Museum of Modern Art, the Belgorod Art Museum, the Vyshnevolotsky and Tver art galleries, as well as in private collections in Russia, Britain, Germany, France and the USA. Alexandra Tokelova is also the author of the remarkable illustrated autobiographical book The Swing of Destiny, which tells of her own life, her husband’s life and work, the Leningrad artist Vladimir Fedorovich Tokarev, whose works are also on our website. The most famous works of A.F. Tokareva: “The Family” in 1985, “The fireplace” burns down in 1989, “Cranes fly away” in 1980, “The thread of Ariadne” in 1965, “Our Home in Kisharino” in 2000, “The White Lilac” in 1997. , “Good Morning” in 1990. Alexandra Tokelova died on May 1, 2015 in her house in the village of Kisharino, Vyshnevolotsky District, Tver Region, at the age of 89. The heritage of Alexandra Feliksovna Tokareva is great, it spread throughout many countries of the world. She is an artist of a wide range of creativity, who created her best works in all genres of painting: portrait, landscape, still life, thematic painting, illustrations for Russian fairy tales. Alexandra Feliksovna belongs to the generation of artists, whose works made up the golden fund of Russian realistic painting of the second half of the 20th century. 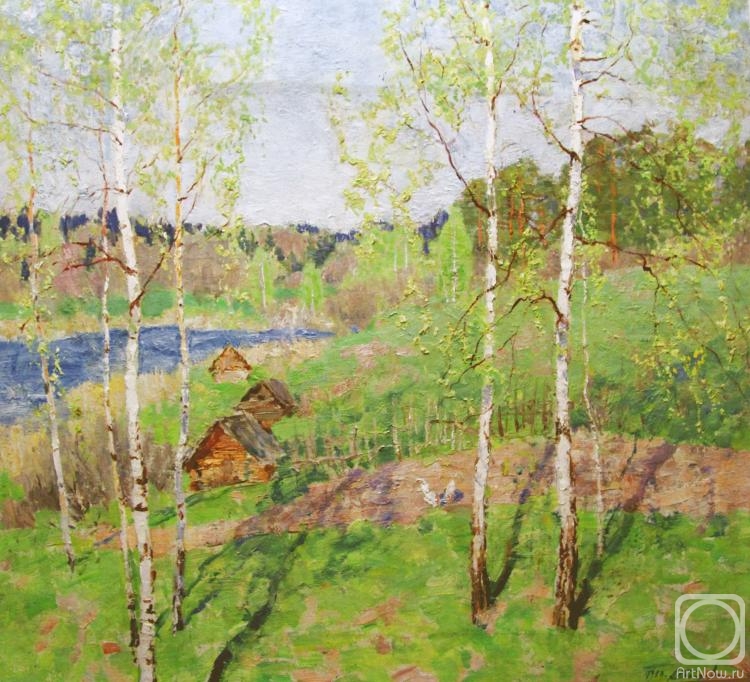