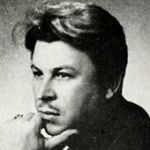 Soviet Ukrainian painter. Member of the USSR Academy of Arts. Born March 15, 1938 in Vinnitsa. He graduated from the Kharkov Art Institute (1961). The author of many subject-themed paintings, landscapes, still lifes and portraits. He worked in the easel painting industry. He was engaged in teaching – in the Dnepropetrovsk Art College. Pupils: artists Malyshko P.A. , Pavlyuk VI Major works: “The Morning of the Builders” (1963); “Ranok”, “Physicists” (1965); “Pridneprovie” (1966); “Over the Bug” (1967), “The Track of Friendship” (1977), “VI Lenin proclaims Soviet Power” and others. He participated in exhibitions: republican since 1963, all-Union since 1967. Lives and works in Vinnitsa. The works of the painter are represented in many public and private collections in Ukraine and abroad.

Photo: “The Friendship Track Is Moving” 1977