Outstanding Soviet Ukrainian artist and teacher. People’s Artist of the USSR. Alexey Alekseevich Shovkunenko was born on March 21, 1884 in Kherson. The first professional mentor of Alexey was the pupil of the workshop of the Kiev-Pechersk Lavra, the icon painter Semyon Semenko, who worked at the icon-painting workshop of Ivan Klimenko, known at that time in Kherson. In this workshop in 1899 the future artist was given to the apprentice. It was Semenko who advised Shovkunenko to continue his studies at the Odessa Art College. Alexey was well prepared and he was immediately enrolled in the second year. Teachers Shovkunenka in the school were K. Kostandi, G. Ladyzhensky, D. Krainev. After graduation from school, from 1909 to 1917 he studied at the Petersburg Academy of Arts in the studio of V. Savinsky. In 1913-1919 he took part in the exhibitions of the Society of South Russian Artists. In 1917, A.A. Shovkunenko returns to his native city. Engaged in creativity, fulfills orders of art lovers, creating portraits, landscapes, etudes. In 1917 – 1922 he taught at the Kherson Proletarian Art Studio, and from 1926 – at the Odessa Polytechnic of Fine Arts. Member of the Society. K. Kostandi in the years 1924-1929. In 1935 – 1965 he teaches at the Kiev State Art Institute. Alexey Alekseevich Shovkunenko was an outstanding teacher. His students were V.G. Puzyrkov, AM Lopukhov, and many other outstanding artists, among them several dozen honored and folk artists of Ukraine. In 1941 he was awarded the title of Honored Art Worker of the Ukrainian SSR. Since 1944 – People’s Artist of the USSR. Since 1947 – – Academician of the Academy of Arts of the USSR. For a long time (1938-1968) he was a member of the board of the Union of Artists of the Ukrainian SSR, and in 1949 – 1951 he was its chairman. Fame Shovkunenku as an artist brought his numerous portraits of writers, actors, sculptors, military leaders and other famous personalities. A.A. Shovkunenko master of landscape, especially industrial. In 1937, for the watercolors from the series “Dneprostroy”, the artist received the Gold Medal at the Paris International Exhibition “Art and Technology in Modern Life.” He was also awarded the Great Silver Medal of the International Exhibition in Brussels in 1958. Still-lifes are known for the artist.
In 1970 Shovkunenko A.A. was awarded the State Prize of the Ukrainian SSR. T. Shevchenko. Chevalier of the Order of Lenin, three Orders of the Red Banner of Labor. Aleksey Alekseevich Shovkunenko died on March 12, 1974, was buried in the Baykovoye cemetery in Kiev. In 1981, the artist’s name was awarded to the Kherson Art Museum, a street in his native city and a river passenger ship. Shovkunenko’s works are kept in numerous museums, galleries and private collections in Ukraine and abroad. 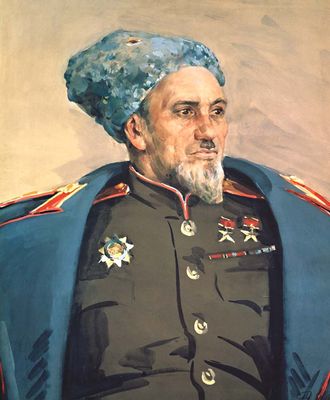