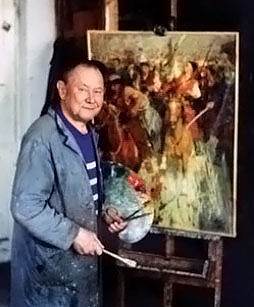 Soviet Ukrainian painter and graphic artist. People’s Artist of Ukraine. Mikhail Alexeyevich Ryasnyansky was born May 17, 1926 in the city of Taganrog (Rostov region of Russia). Member of the Great Patriotic War. Awarded the Order of the Patriotic War II degree and medals: “For courage”, “For victory over Germany”. Subsequently, military themes became one of the main in the artist’s work. In 1947 he graduated from the Rostov-on-Don Art College. MB Grekova, and in 1956, graduated with honors from the Painting Department of the Kiev State Art Institute, where he studied with TN. Yablonskaya and S.A. Grigoriev. Since 1957, Ryasnyansky MA – Member of the Union of Artists of the USSR. Member of art exhibitions: regional since 1948, republican – since 1956, all-Union since 1965, foreign – since 1961. More than 30 personal exhibitions of the artist took place. Worked in the field of easel painting. Author of genre works (including a historical theme), master of landscape, portrait. From 1957 to 1968 taught at the Chisinau Art College, and from 1968 to 1970 – at the Kiev Art Institute. At the invitation of the Nikolaev regional organization of the Union of Artists in 1970, Ryasnyanskii moved with his family to Nikolaev, where Mikhail Alekseevich’s creative and educational activities continued. In 1976 he received the title of “Honored Artist of the Ukrainian SSR”, and since 2001 – “People’s Artist of Ukraine”. His works are presented in the National Art Museum of Ukraine, the Nikolaev Art Museum, in museum and private collections in Ukraine and abroad.