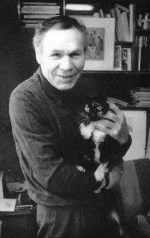 Soviet painter, graphic artist. Member of the USSR Union of Artists. Honored Artist of the RSFSR. Ryabokon Grigory Anisimovich was born in 1920 in the village of Gorodishche in the Poltava region. From 1938 to 1940 he worked as a pupil of the turner at the timber factory No. 8, then as a turner at the mechanical workshops of the geological exploration trust in Arkhangelsk. Member of the Union of Artists of the USSR since 1960. He graduated from the Saratov Art College in 1951. He chose the profession of the artist in adulthood and came to the school after the Great Patriotic War. From 1940 to 1946 he served in the Air Force of the Northern Fleet, where he was a private, then commander of the division and a company foreman. He was awarded the medal “For the defense of the Soviet Arctic”, the medal “For victory over Germany”. From 1946 to 1947 years. worked as an artist in the rear of the Northern Fleet. At the end of the war, and then the Saratov School forever connected his life with the North. He began working in Arkhangelsk in 1951. Here he proved himself to be a talented artist. The main theme of creativity is the life of the people of the Far North and the Nenets people. His best graphic works include Zveroboi Tarkhanov (1964), Shepherds reindeer herders (1964), The Sledding Rest (1964), Severnaya Derevnya (1965), On the Road (1966) ), Tea in Pasture (1967), Winter Sun (1968), Women (1969), In Kelchemgorah (1970), Children (1970), and others. Many of Ryabokon’s works were reproduced in the central and local press, in the magazines “Creativity”, “Artist”, “North”, in the newspaper “Pravda”, in Literaturnaya gazeta, in the monograph “Arkhangelsk artists”. Many books of the North-Western publishing house were written by him, including A.Pichkov’s books “The Deer’s Paths”, V. Ledkov’s “Willow Sea”, A.Kanyukov’s “My Yasovay”. Grigory Anisimovich Ryabokon was awarded with the diploma of the All-Russian Book Contest in 1965. In the 50s, Grigory Anisimovich was the director of the art studio in the House of Culture of the SBDC. Later he was the organizer of the creative youth association at the Union of Artists, from which many artists of Arkhangelsk entered the professional art. In the rule of the Union of Artists was elected in 1961. For 6 years he headed the Arkhangelsk organization of the Union of Artists and skillfully combined creative work with organizational work in the team. In 1972, for his services in the development of Soviet fine arts, Ryabokon Grigory Anisimovich was awarded the high honorary title “Honored Artist of the RSFSR”. Through the efforts of Gregory Anisimovich and board members at the Artists’ Union, an asset of young artists was created, uniting more than 50 young masters of painting and graphics. A creative group of professional artists has grown up in Severodvinsk, Kargopol, Novodvinsk. The participant of exhibitions: city, regional (1960-1998), regional “Soviet North” (1964-1984), “Russian North” (Kirov, 1998), republican “Soviet Russia”. Personal exhibitions. The works of G.A. Ryabokon – in the Arkhangelsk Regional Museum of Fine Arts, Ministry of Culture of the Russian Federation, Exhibition Directorate Khud. RF Fund., in many public and private collections.