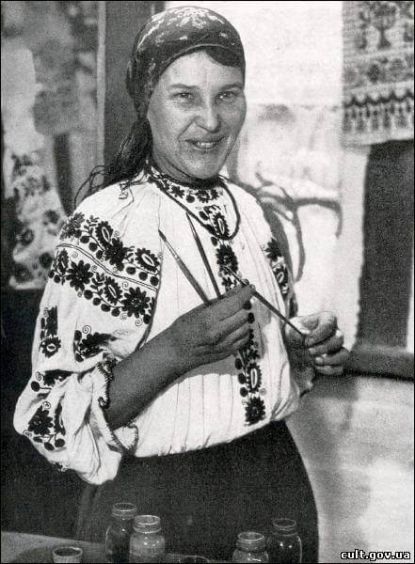 Ukrainian folk artist. Primachenko Maria Avksentevna was born on December 30, 1908 in the village of Bolotnia (now Ivankivsky district) in the Kyiv region, where she lived her whole life. My father, Avksentii Grigorievich, was a carpenter, he made yard fences. Mother, Praskovya Vasilievna, was a master of embroidery. The childhood of Mary Avksentevna was overshadowed by a terrible disease – poliomyelitis. This made her not childishly serious and observant, exacerbated hearing and sight.
In 1936 a folk artist was invited to the experimental workshops at the Museum of Ukrainian Art in Kiev – a kind of school of folk art. Maria works a lot and fruitfully: paints, embroideries, paints pottery. The artist takes part in the exhibition of folk art in 1936 and is awarded a diploma of the 1st degree. Since then, her work with constant success has been exhibited at exhibitions – domestic and foreign. In 1960 Primachenko MA she was awarded the Order of the Badge of Honor in 1966. In 1966 she was awarded the State Prize of the Ukrainian SSR Shevchenko for the cycle of artwork “People for joy” In 1970, the artist received the title of Honored Worker of Arts of the USSR, and in 1988 – the title of People’s Artist In the complexity of the composition and at the same time of harmony, a special place in the work of Maria Primachenko is occupied by plot pictures, in which the fairy tale and the past, fantasy and reality are fused into a single organism embodying the idea of ​​the great unity of Nature. ah epic calm and full of dignity.The universal human theme of the struggle between good and evil goes through all the works of Primachenko, she always wins well, the theme of the joy of being unites with the theme of sadness.
In 1986, the artist created works in which the extreme situation in the life of our people – the Chernobyl nuclear power plant accident – was reflected. Thus the theme of the struggle between light and dark forces is again transformed in her work. M. A. Primachenko died on August 18, 1997. The decision of the Kyiv City Council in honor of Maria Primachenko was renamed the capital’s boulevard Likhacheva.