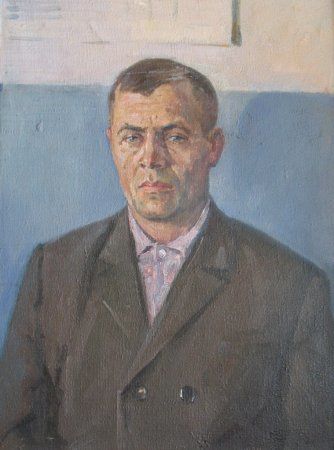 Soviet Urainian painter. Member of the USSR Academy of Arts. Leonty Ivanovich Orlik was born July 31, 1936 in Kirovograd in a working family. He began his career as a mining master at the mine “Komintern”, then worked as a design technician at the “Krivbasproekt” institute, visited the fine art studio in Krivoy Rog, and later in Kirovograd. But the desire to draw professionally led him to the Moscow Correspondence People’s University of Arts. N.K. Krupskaya, after which he began to work in the artistic production workshops of the city of Kirovograd. He graduated from the Moscow Correspondence People’s University of Arts. Krupskaya, teachers – A.Podkolizin, G.Shishko. During the years of persistent labor, it grew significantly as an artist: the creative potential was gradually being formed into rather specific aesthetic orientations and attitude, own creative handwriting. Leonty Ivanovich belongs to the generation whose creative growth occurred in the 60s – 80s of the last twentieth century. He was actively involved in creative life: he started working on planners, on creative business trips. He left for the Crimea, Western Ukraine for the construction of the Dolinsk-Pomichna railway, worked in the districts of the region: he wrote portraits of peasants-Trudoviks. His works are united by the constant search for beauty and harmony in nature and man. The artist is a supporter of a realistic direction in art. His paintings “In the workshop” (1984), “The locksmith MD Strilets” (1975), “The Holy Place of Rozumivka” (2005), “Landscape of the village Subottsy” (1995), “War and Labor Veteran”, 1986, ” Winter cares “1985,” Evening in the steppe “(1980) – these are landscapes, landscapes, portraits, thematic paintings. He reproduces time, refers to the images of contemporaries. The realism of his portraits has a deep national root, an accurate psychological characteristic. An attempt to understand nature, to penetrate into its mystery inherent in landscapes. Member of the National Union of Artists of Ukraine since 2000. Leonty Ivanovich participated in numerous All-Ukrainian autumn exhibitions, republican: “Picturesque Ukraine”, “Always on the lookout”, which exhibited paintings for different topics: “Autumn Evening”, “Autumn, in Visokih-Bayrak”, “Subottsy”, “Summer” “Blooming field”, “Morning at Sea”, “Granite Quarry”, “Inspection”. In 2011, the regional art museum opened the jubilee exhibition of Leontia Ivanovich, on which the artist transferred to the museum funds all the works that were presented on it. The artist died on March 2, 2012.
The works of Orlik L.I. are represented in the Kirovograd regional art museum.