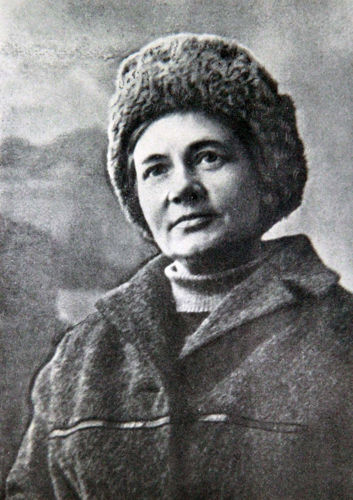 Soviet Ukrainian painter. Member of the USSR Union of Artists. Yadviga Alexandrovna Matzievskaya was born on April 17, 1916 in St. Petersburg. I worked in the art studio at the Palace of Culture on Vasilievsky Island. Later she studied at the Leningrad Academy of Arts. The father and mother of Jadwiga were shot in 1937-38 as enemies of the people. In 1944 the artist moved to Kiev. In 1945, entered the Kiev Art Institute, the Faculty of Painting. She studied under G. Svetlitsky and I. Shtilman. Graduated from the institute in 1950. Member of the USSR Union of Artists. Member of art exhibitions: republican – since 1949, all-Union – since 1961, foreign – since 1955. The first solo exhibition of Matsievskaya Ya.A. was held in Kiev in 1964. She worked in the genres of lyrical and industrial scenery. The artist traveled many corners of the then USSR: Ukraine, Byelorussia, Karelia, Baikal, Yenisei, Central Asia, Amur, Kamchatka, Sakhalin, Yakutia. Her works combine monumentality, romanticism and a panoramic solution of landscape compositions, which in spirit are close to the works of N. Roerich. Great-grandfather Yadviga Matsievskaya, Ivan Khrutsky, was a famous Belarusian artist. By bit, she collected the work of her great-grandfather, who later transferred to a museum in Polotsk. She lived and worked in Kiev. The works of Ya.A. The museums are kept in the collections of the National Polotsk Historical and Cultural Museum-Reserve, in the collection of the Donetsk Regional Art Museum, in private collections in Ukraine, Russia and Europe.