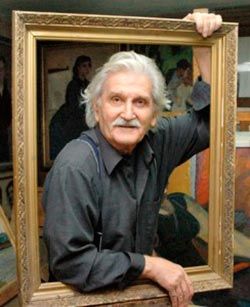 Ukrainian Soviet painter, graphic artist, illustrator, local history researcher. He was born in 1925 in Mariupol. In 1931 – 1937 he studied at the Art Studio at the Palace of Pioneers, where his first teacher was GK Bendrik. In 1951 he graduated from Kharkov State Art College, where he studied at Slipchenko. Since 1951 he has been working in Zhdanov’s urban society of artists and since that time he has been actively exhibited at all city and regional art exhibitions. In 1957 and 1958 he took part in republican art exhibitions.
Works in the genre of easel painting, monumental and decorative art and book graphics. In co-authorship he creates monuments to Metropolitan Ignatius, a memorial to the heroes of the Great Patriotic War, etc. His mosaic paintings adorn the building in Mariupol, Berdyansk, Slavyansk and other years. In 1990, for his services in the development of Ukrainian fine arts, he was awarded with the Diploma of the Presidium of the Supreme Soviet of the Ukrainian SSR for many years. For the painting “Steelworkers” was awarded a diploma of the first degree of the Donetsk Union of Artists and Diplomas of the Presidium of the Union of Artists of the USSR. Lel Kuzminkov works in the portrait genre, one of the first to perform portrait work under a contract with the USSR Ministry of Culture. His portraits are kept in the museums of Mariupol, Donetsk and other cities. Found recognition and a series of landscapes of the artist on the grounds of the Crimea and Lithuania. Lel Kuzminkov confirmed his image of the landscape painter at the foreign exhibition “Artists of Ukraine in Paris” (1992). In March 2011, by the decision of the session of the Mariupol City Council, Lel Kuzminkov was awarded the title “Honorary Citizen of the City of Mariupol” for his many years of creative work for the city and in connection with 85 year anniversary. The works of Kuzminkov LN, are in the permanent exposition of the Taras Shevchenko Museum in Kiev, as well as the Russian National Library in Moscow, decorate private collections of many connoisseurs of painting.