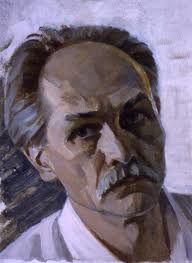 Ukrainian painter. Member of the USSR Union of Artists. Veniamin Vladimirovich Kushnir was born in the Khmelnytsky region. He studied at the Lviv Institute of Applied and Decorative Arts with R.Selsky, I.Bokshay and I.Gutorov. In Lviv, his creative vision and life credo was formed – not to surrender his own life positions, to remain independent. After he could not get a residence permit in Lviv, at the invitation of his friend classmate Kushnir went to Dnepropetrovsk and two years he taught at the Art College. Since 1956 he lived in Kiev. In the 1960s he was a member of the Club of Creative Youth and headed the section of artists in the Club. These were the happiest years in the life of the artist: a burst of creative activity, enthusiasm from endless conversations about art, about the past and present of Ukraine. Among his friends participating in these debates, the most progressive Ukrainian cultural figures are poets, writers, artists: Svetlichny, Gorsky, Simonenko, Tanyuk, Sevruk, Zalivaha … In 1965, the first arrests of representatives of the Ukrainian intelligentsia began. Near the workshop of Kushnir the KGB officers were constantly on duty. The artist knew that he was followed, but ventured to go to his friends in the Mordovian camp. All the horror of what was happening around the artist portrayed in his work “Scherzo”. A terrible picture of violence is an image of a defiled Ukraine, another name for a picture is Gvaltovana Ukraina. Veniamin Vladimirovich, who all his life treated women with deep tenderness and delicacy, portrayed them in his paintings as Madonna. Therefore, this work is evidence of the painful inner experiences of the artist, the fact that he has not been illusions for a long time and is aware of the essence and scale of what is happening. The language of the works of Veniamin Kushnir is deeply symbolic, that’s why he is called a thinker. The son of the painter Ivan Kushnir calls the painting “Rhapsody” the main work of his father. In this philosophical picture the favorite theme of many famous masters is considered: Youth, Maturity and Old Age. Three musicians symbolize three ages and at the same time three levels of skill. These are symbols of the cycle of life – the beginning of the path, the flowering of forces and the inevitable fading. The work of Rhapsody is bequeathed to the National Art Museum of Ukraine. Veniamin Kushnir created many of his works in the Carpathians, where he was looking for certain spiritual roots of the people – they are manifested in customs, costumes, iconography and architecture. Even while studying at the Lviv Institute, he, along with his friends, Hutsuls, often went around the villages, went to sketches, participated in Hutsul festivities. One day the students witnessed a terrible fight that shocked her with an unexpected end – full reconciliation of enemies and a ritual dance – a lasso. Subsequently, the artist will paint a picture of “Arkan”: Hutsuls here – a cohesive formidable force. A rethinking of the “Dance” by Matisse