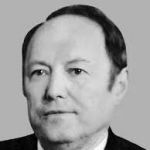 Ukrainian painter and graphic artist. Member of the USSR Academy of Arts. He was born on December 21, 1926 in the village of Ugry, Lviv region. In 1953 he graduated from the Lviv Institute of Applied and Decorative Arts. The teacher of the specialty was R. Selsky. Since 1956, he took part in regional, republican and all-union exhibitions. Since 1971, he taught at the Lviv Institute of Applied and Decorative Arts. Since 1973 he became a member of the National Union of Artists. In 1990 he was awarded the title of Honored Art Worker of Ukraine. Lived and worked in Lviv. The artist’s works are in art museums in Ukraine and private collections. The artist’s works were presented at many auctions, including: “Epoch” – decorative and applied art, painting of the ХІХ-ХХІ СТ. (catalog November 2007). “Palette” – Ukrainian and Russian paintings of the ХІХ-ХХ century. (catalog November 2007).