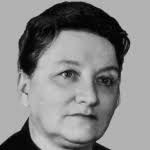 Soviet Ukrainian artist. Member of the USSR Academy of Arts. Nadezhda Dmitrievna Kompaniets was born May 12, 1913 in the village Skomoroshki of the Kiev province in the family of employees Dmitry Mikhailovich and Efimia Andreevna. After graduating from high school and the Kiev Agricultural College of Intensive Crops in 1933, she entered the Kiev Institute of Proletarian Art (since 1934 – the Kiev State Art Institute). Teachers in the specialty were: F.G. Krichevsky, A.I. Taran, S.Nelepinskaya-Boychuk, V.F. Sedlyar, K.D.Trokhimenko, S.N.Erzhikovsky, S.A. Grigoriev. In 1933, Nadezhda met her future husband – Yuri Kiyanchenko, after marriage took the double surname Kompaniets-Kiyanchenko. At the beginning of the Great Patriotic War, Yuri goes to the front and soon falls into captivity. In November 1941, Nadezhda went to find her husband. Found him in the concentration camp “Khorolskaya Pit” in Poltava and agreed that he was sent home.
Spouses return to occupied Kiev, where they continue to work, participate in art exhibitions. Afraid of approaching the front line, they move to Lviv, later to the Czech Republic, and then to Austria. There they met the arrival of Soviet troops.
Yuri Kiyanchenko is again summoned to the army and Nadezhda returns to Prague. But soon again goes in search of her husband and finds him in a camp for internees in the Hungarian town of Vlasim on the border with the Czech Republic. Only in December 1945 the Kiyanchenkos get the opportunity to return to their native Kiev.
In Kiev, Nadezhda Kompanets-Kiyanchenko continues her studies at the Kiev Art Institute and defends her diploma in 1948. Participant of art exhibitions: republican – since 1947, all-Union – since 1948. Member of the Union of Artists of the USSR since 1949. In 1954 the Kiyanchenko family from the Union of Artists received a workshop on the territory of the Kiev-Pechersk Lavra. In the same house there were workshops of Mikhail Deregus, Stepan Kirichenko, Mikhail Chepik, Onufry Bizyukov. Worked in the genre of portrait. landscape. still life. thematic picture.
In 1993, an exhibition of works by GV Kiyanchenko and ND Kompaniets-Kiyanchenko took place at the State Museum of Ukrainian Fine Art in Kiev. The artist died on December 11, 2003. The works of Nadezhda Dmitrievna Kompaniets-Kiyanchenko are presented in the National Art Museum of Ukraine, in museum, gallery and private collections in Ukraine and abroad.