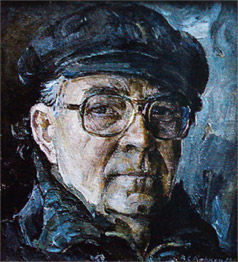 Painter. Member of the USSR Union of Artists. Vasily Sergeevich Karkotz was born on January 1, 1926 in the village of. Banovka of the Kustanai region in Kazakhstan in the family of a worker. Member of the Great Patriotic War. Port Arthur, Wonsan, Tsushima – the stages of the military path of Vasily Karkotz – a sailor of the Pacific Navy.

From 1947 to 1952 he studied at the Tashkent Art College. P. Benkov, and after his graduation – in the Krasnodar Art Pedagogical School. Since 1961, Karkotz V.S. – participant of regional, republican, all-Union and foreign art exhibitions. Member of the Union of Artists of the USSR since 1963.

Worked in the field of easel painting. Master of still life, landscape and portrait.

He worked in Dnepropetrovsk and in the Nikolaev organization of the Union of Artists of Ukraine.

His works are in museums and private collections in Ukraine and abroad.