An outstanding Soviet painter. People’s Artist of the RSFSR (1979), Corresponding Member of the Academy of Arts of the USSR (1973). Honored Artist of the RSFSR (1969). Laureate of the State Prize of the USSR (1973). In 1918-1927 years. studied in Moscow in VHUTEMAS – VHUTEINe in II. Mashkova, A.V. Shevchenko and V.A. Favorsky. One of the founders of the OST (1925). In 1924, for the first time, he was exhibited at the First Discussion Exhibition of Active Revolutionary Art Units in the “Group of Three” with AA. Deineka and Yu.I. Pimenov. Since 1925, a member of the Society of Machine Tools (OST). In 1927 he graduated with honors from the graphic faculty of VHUEMAS (VKHUTEIN) with the title of graphic artist. He began teaching in the art studio of the Frunze department of public education in Moscow, at the ethnological faculty of Moscow State University. M, B, Lomonosov. In 1928 he participated in the All-Union Polygraphic Exhibition. In 1929 – 1930 – an associate professor of the Leningrad VKhUTEIN. In 1930-1934 he was an associate professor of the MPI. In 1934-1938, he was an associate professor at the Moscow State Academy of Architecture. Surikov. During the Great Patriotic War (1941 – 1945) he served in the ranks of the Red Army. Worked as an issuing editor and artist in the magazine “Frontline Humor”, and then the main artist of the exhibition “Political work in the parts of the 3rd Belorussian Front.” In 1947-1948 he taught at the Moscow Central Art and Industrial School in the faculty of monumental painting. In 1948 – 1979 he taught at the Moscow Polygraphic Institute, where from 1950 to 1974 he was in charge of the Department of Drawing and Painting. In 1958 Goncharov was awarded the title of professor. In 1959 Goncharov created four main panels for the Soviet exhibition in New York. In 1960 AD Goncharov’s book “On the Art of Graphic Art” was published, and in 1964 – the book “The Artist and the Book”. In 1971 – 1979, Goncharov served as chairman of the jury of the All-Union annual competition “The Art of the Book.” Corresponding member of the Academy of Arts of the USSR (1973). AD Goncharov died June 6, 1979 in Moscow. Awards and prizes: 1928 – Diploma of the All-Union Polygraphic Exhibition; 1938 – “Grand Prix” and a gold medal at the World Exhibition in Paris. 1945 – medal for military merit, medal for the capture of Kinesburg, medal for victory over Germany in the Second World War. 1956 – Diploma I degree for the design and illustration of the collection F. Petrarch “Selected Lyrics” and a diploma of the second degree for the design and illustration of the book I. Goethe Faust. at the All-Union exhibition of books, graphics and posters (since February 11, the Lenin Library); 1957 – Diploma of the I degree of the Ministry of Culture of the USSR for illustrations to I of the collected works of W. Shakespeare; 1958 – silver medal for the panel “Golden Moscow” in the Soviet pavilion of the World Exhibition in Brussels and for illustrations to the works of Lope de Vega and E. Hemenguey; 1959 – Gold medal for illustrations to plays by W. Shakespeare at the International Book Art Exhibition in Leipzig. Honorary Diploma of the World Peace Council for the great contribution to the cause of peace; 1961 – medal For Labor Valor.; 1965 – Silver medal for the design of the book by W. Shakespeare Hamlet. and for illustration and book design of the book by A.P. Chekhov’s Cherry Orchard at the International Book Art Exhibition in Leipzig; 1969 – Honored Art Worker of the RSFSR; 1971 – the award to them. Gutenberg for outstanding achievements in the development of Soviet book culture and international publishing at the International Exhibition of Book Art in Leipzig. In the same place – Gold medal for illustrations to the works of F.M. Dostoevsky; 1973 – State Prize of the USSR for illustrations to the poem of V.V. Kazina Great initiative (portrait of VI Lenin) and works of A. N. Ostrovsky, F.M. Dostoevsky. 1979 – People’s Artist of the RSFSR. The works of the painter are represented in many museums of the former USSR, in public and private collections on the territory of Russia and other countries. 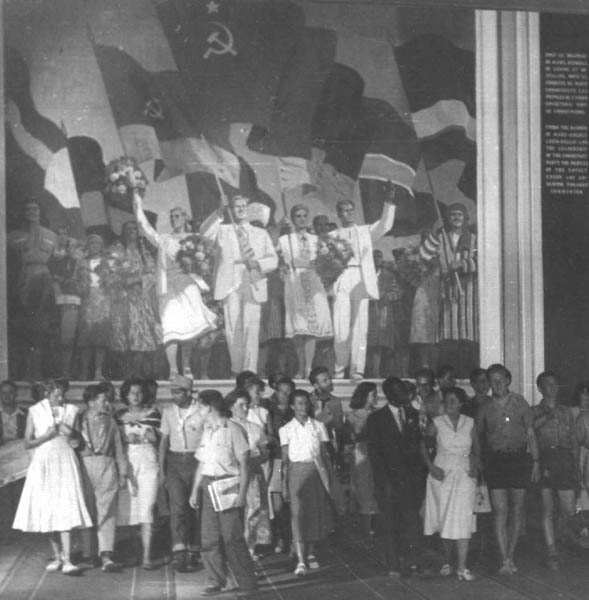 Photo: Goncharov A.D. “Friendship of the Peoples of the USSR”, a panel for the Soviet pavilion at the International Fair in Leipzig; 1953 year

Photo: Goncharov A.D. “Friendship of the Peoples of the USSR”, a panel for the Soviet pavilion at the International Fair in Leipzig; 1953 year 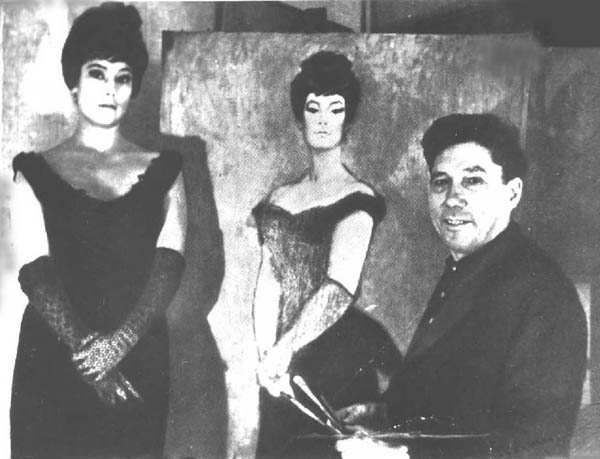 Photo: Goncharov A.D. “Portrait of Tatiana Samoilova in the role of Anna Karenina” 1966 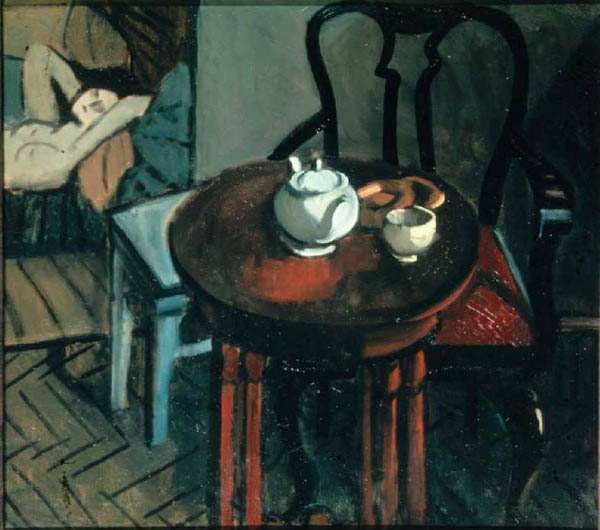 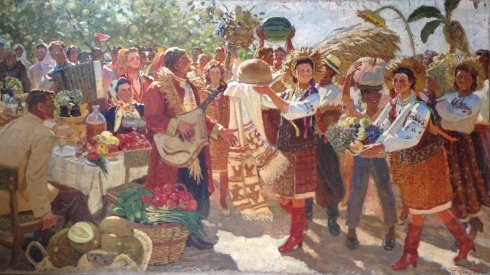