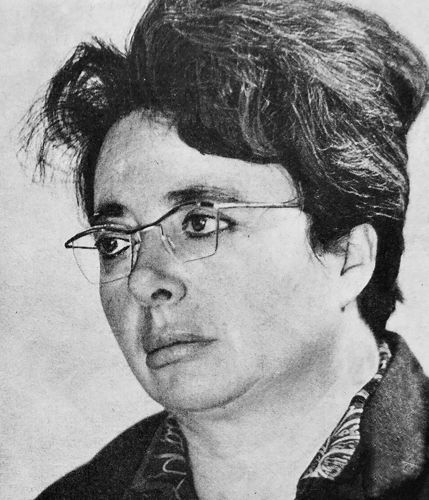 Soviet Ukrainian painter. Member of the USSR Academy of Arts. Anna Lvovna Fainerman was born on April 3, 1922 in the village of Uspenskoye, Beloglinsky district, Krasnodar Territory of Russia. In 1941 she graduated from the Art High School named after. T. Shevchenko. After graduating in 1945, the Faculty of Journalism of the Ural University entered the Kiev Art Institute, which graduated in 1951. Her teachers were: G. Svetlitsky, M. Sharonov, I. Shtilman, K. Yeleva, S. Otroshchenko. While studying at the Institute she worked as a literary employee and proofreader in the publishing house “Soviet Ukraine”. The wife of the famous Ukrainian artist Rapoport Boris Naumovich. In 1954 the picture of A.L. Finermann was exhibited at the Fine Arts Exhibition of the Ukrainian SSR, dedicated to the 300th anniversary of the Reunification of Ukraine with Russia, opened in Moscow on October 16 at the State Tretyakov Gallery. Since that time, she has been an active participant in republican, all-Union and foreign art exhibitions. Member of the Union of Artists of the Ukrainian SSR since 1955.
Worked in the field of easel painting. Master of landscape and still life.
The artist’s solo exhibitions were held in Kiev in 1973 and in 1984.
The works of Finerman A.L. are stored in museum, gallery and private collections in Ukraine and abroad.