Soviet and Ukrainian painter. People’s Artist of the USSR. Born April 20, 1924 in the city of Katerinoslav, now Dnepropetrovsk. In 1946 he entered the Dnepropetrovsk Art College. Afterwards – to the Kiev Art Institute, which he graduated with honors, his teachers were K.D. Trokhimenko and I. Shtilman. Member of the CPSU. Member of the Great Patriotic War. In 1955, George Chernyavsky returned to his native city. He worked as chairman of the Dnipropetrovsk organization of the Union of Artists of Ukraine until 1974. He was engaged in writing landscapes and rarely turned to other genres. Thin and lyrical painter. In his paintings, the artist emphasizes the peculiarity and uniqueness of Marx’s avenue. In fairy-tale snowy beauty I saw the street. T. Shevchenko. I could describe the tenderness of the lilac haze over the barely plowed land. The artist painted the Ukraine in gold of mature breads, and in autumn fading. A series of landscapes of snow-covered Transcarpathia is fascinated by strange beauty, pronounced Ukrainian color. The grandeur of the architecture of Moscow and St. Petersburg, the ancient narrow streets of Krakow amaze with the expressiveness of the images and carry a cognitive value. In 1974, the artist moved to Kiev. There he works as a teacher at the Art Institute, as well as deputy chairman of the Union of Artists of the Ukrainian SSR. Here George Chernyavsky begins to master the technique of watercolor. And, despite the tremendous employment, almost every year he is part of the All-Union Creative Group of Watercolorists. Even in the Soviet era, the artist’s talent did not go unnoticed. He was awarded the State Prize. T. G. Shevchenko, awarded the Order of Lenin, as well as awarded the title of People’s Artist of the USSR. George Georgievich loved to travel and from everywhere he brought unique landscapes. So among his works there is an image of cold Kamchatka, solar Nurek, where HPP was built, blue night Murmansk, Komi and Novaya Zemlya. Returning from the next creative wanderings, the artist happily met with schoolchildren, students, miners, builders. He told them about the region where he visited. He described in detail the nature, events, life of people. Georgy Chernyavsky dreamed of writing a book of his memoirs, but, unfortunately, did not have time to do it. The main works: a series of paintings “Industrial Dnepropetrovsk” (1955 – 1970); “On the land of Krivoy Rog” (1965); “Manganese” (1967); “Dneprodzerzhinsk GES”, “Siberia” (1968); “Iron ore”, “The Museum of Lenin in Gorki”, “Petrovka”, “Volga” (1969); “Land of Ulyanovsk” (1970) and others. Participated in exhibitions: republican since 1951, all-Union since 1955, foreign since 1968, personal – Dnepropetrovsk, 1958, 1967, 1970; Kiev, 1960, 1970. He died in the 1980s. 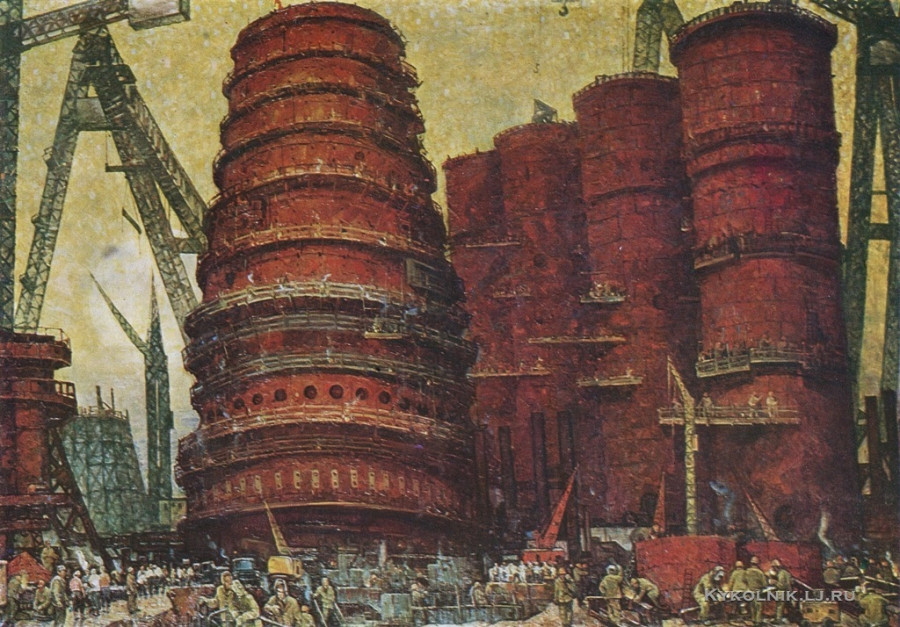 Photo by Georgy Chernyavsky. From a series of works “On Lenin’s Places”
Kyiv, “Art”, 1972