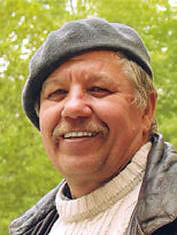 Soviet Crimean painter. Member of the USSR Academy of Arts. Chebotaru Nikolai Alekseevich was born on December 26, 1948 in the village of Glubokoe, Odessa region. In 1972 he entered the Republican Art College. I.E. Repin in Chisinau, who graduated in 1976. From 1976 to 1979. taught at the children’s art school in Moldova. In 1979, Nikolai Chebotaru moved to the Crimea and took a job as an artist in the artistic and industrial workshops of the city of Sevastopol. Since 1982 he has participated in all-Union, republican and city art exhibitions. In 1982, Chebotaru Nikolai Alekseevich was admitted to the Union of Artists of Ukraine. Specialists consider painting Chebotaru to the direction of Impressionism. The manner of the artist’s letter, conveying the play of light and shadow, the fragility of sunlight, the elegance and mystique of remote silhouettes makes the artist akin to famous world names. Nikolai Chebotaru rightfully occupies a prominent place among contemporary artists of Ukraine.